Have you ever wondered what the story behind the Cardiff Kook is? He has a website and a calendar as well as the namesake of a popular 5K run and occasionally dressed up in various costumes.  But, some are calling for an end to his shenanigans. Let’s shed some light on this fun-yet-controversial 16′ bronze statue that was erected on Pacific Coast Highway (near the San Elijo Beach Campground) in 2007 to less-than-stellar fanfare.

Magic Carpet Ride is the statue’s official name. The Cardiff Botanical Society raised $92,000 and commissioned an artist named Matthew Antichevich, an Encinitas surfer and a teacher at Mount San Jacinto College. Approximately $30,000 of installation costs were contributed by the city of Encinitas and the base of the statue has plaques to commemorate large donors.

Kook is a slang term for a wannabe surfer and though the statue was intended as a tribute to local surf culture, its form has been deemed… wrong. Professional surfers argue that his wrists are too limp, arms extend oddly and the wave is too wimpy. So, poor Magic Carpet Ride’s poor technique—he’s supposed to be performing a “backside floater”—resulted in locals labeling him the Cardiff Kook.

But here’s the thing—he WAS supposed to be riding an epic wave, but the Cardiff Botanical Society ran out of money so actual surf was deleted from the design. And, Antichevich says it was difficult to get the body positioning right from 16′ in the air while working on the statue.

It took three years to bring the statue to fruition so, needless to say, the Cardiff Botanical Society and Antichevich were surprised and devastated by the initial backlash. Local surfers and residents flooded the Cardiff Botanical Society’s inbox demanding that the statue be removed for reasons varying from poor surfing form to blocking an otherwise pristine ocean view. “Remove the Kook” bumper stickers were plastered everywhere.

(Luckily, the animosity seems to have passed with locals now embracing the Kook. See below.)

So, how does one handle an undesirable statue? The answer is by dressing it up, of course. The Cardiff Kook has:

And, there have been many more outfits. While technically classified as vandalism, some declare these acts art and it has been a boon for Cardiff’s tourism trade.

But, while cleaning up the Kook doesn’t cost the city extra money, it does divert resources away from other projects. For example, dismanteling the paper mâché shark was thought to have consumed about $400 of manpower, which irks some residents.

Is the Kook a nuisance or an asset? 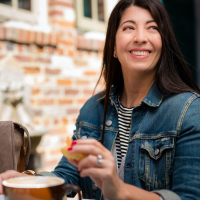